St. Honoré Bakery is a French bakery with 3 locations here in the Portland area. I have been there a handful of times with friends for delightful treats like Chouquettes or Pain au Chocolat as well as for lunch where I’ve had a variety of panini and salads.

I was delighted to learn that they are beginning to offer some baking courses starting with a class on tarte aux pommes. When I was in France over 10 years ago, one of my favorite things (beyond the bread) to eat was apple tarts. Every morning I would go to the bakery around the corner and get an apple tart. So I was excited at the opportunity to learn their secrets. Also, I thought we’d be learning to make the puff pastry, which I’ve made before but was hoping to learn an easier way to make it (it’s a pain in the ass, but oh sooooo delicious).
To my chagrin, we used frozen puff pastry (though I’m kind of glad to know that I can actually buy it), and then we just assembled the tarts. I would say that the class was less of a baking class and more of a tasting class..
We tasted…
I left with a tart aux pommes of my own and a full belly.
But most of all, I left with the desire and motivation to learn more about French baking.
We also did an apple tasting which was very enlightening. Apples often taste VERY different raw vs. cooked. 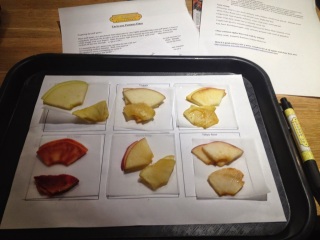 That red on on the left is called the Pink Pearl and it is divine!
The owner of the bakery is Dominique Geulin who was born and raised right above a bakery in Normandy, France. He was awarded the prestigious Meilleur Ouvrier de France, which is a craftsman competition held every 4 years in France. All of this aside, he was very friendly and extremely nice! I told him that I’m considering a baking tour to Normandy and he gave me his contact information so we could chat about it before hand.
So now I’m even more motivated to take this baking tour in France!
And to finish…my tarte aux pommes… 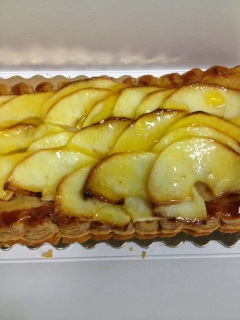